Keno is one of the most common and entertaining games that you can play in a casino. One of the advantages of this lottery-style game is that the rules are rather simple, and it won’t require you to create some advanced tactics and plans in order to play and enjoy the game.

The player will get a keno card or a betting slip before the game starts, and there will be eighty numbers on the card. Usually, they are separated in eight rows with the split in the middle. On the first half, there would be all the numbers from one to forty, and on the other half, from forty-one to eighty. Naturally, there are variations here, and you could find tickets with only seventy numbers as well.

Depending on the casino, the player will have a chance of selecting several numbers. This number can vary, and it is usually any number between one and ten per ticket. However, there are casinos that allow as many as twenty numbers that you can pick.

When you receive the betting slip, you will select the numbers that you like or that you think might win you the game. The price is usually per ticket, so you would pay the same amount whether you select one or ten numbers. Therefore, it is undoubtedly the best option to select the maximum amount of numbers that you can. Of course, this is only when it comes to chances of guessing the right number. Many casino players believe that more is better, and the truth is in between. If you guess five out of five numbers, you will get fifty to one payout. However, if you win five out of ten selected numbers, the payout will drop to three to one.

After the game starts, the host will randomly draw twenty numbers, and you will win the money depending on how many numbers you managed to match on your betting slip. Today, the numbers are usually based on RNG or random number generator, and they are randomly selected by a computer. Of course, the chances of matching all twenty numbers are nearly impossible, and the chance of hitting all of the numbers is over three and a half quintillion (which is a number with nineteen digits).

When you receive your betting slip, you will have a chance of either selecting numbers by yourself or, in some casinos, letting the computer randomly select your numbers. Whichever option you select will give you the same odds and equal chances of winning.

The chance of hitting one number is one in eighty since there are eighty numbers. Naturally, if you play a game with seventy numbers, the odds would go higher and will be one in seventy. Since you will be selecting twenty numbers, the probability of one of those numbers appearing will go a lot higher, and it will be one in four. However, if you hit the first number, the odds would go a lot higher until they reach that mind-blowing number we have mentioned.

Some of the casinos might offer you a chance of playing several rounds with a single ticket. Naturally, the higher the amount you bet, the higher the reward might be. Unfortunately, there is little you can do to improve your chances, and the only thing you could do is select fewer numbers than you are allowed, which is silly since it will only lower your chances.

However, there are several things that you can actually do that might improve your odds. Firstly, you should find a casino that offers better payouts. While this may seem obvious, many people forget this when they start playing the game. For example, casinos usually offer you to select ten, fifteen, or twenty numbers, and then, they will proceed to draw twenty out of eighty numbers. If you select more than ten numbers, for example, fifteen, you will be paid much more if you manage to guess all of them. The payout for fifteen guessed numbers is ten-thousand to one.

One of the other things that you can do is try to play the game for free. While you won’t really earn anything, you will be able to understand the game better.

It is also worth mentioning that most online casinos offer this game. Furthermore, if you play keno games online, you will have better payouts compared to the brick-and-mortar ones. If you choose to play keno online, the rules will be the same as in a regular casino.

However, there are several differences in these two versions of the game. As we have already mentioned, the payouts can differ. Besides, online casinos sometimes offer a progressive jackpot that can randomly occur at the end of each game. While there are so many keno strategies, the numbers are drawn by RNG, and there is nothing you could do to predict or determine the numbers that will show up.

Furthermore, there is also a house edge that keno players should consider before starting the game. Besides, depending on the online casino you visit, there will be different odds and even different betting options. You can even find casinos that offer a reward if you manage to miss all the numbers, but they are usually available if you pick ten or more numbers. 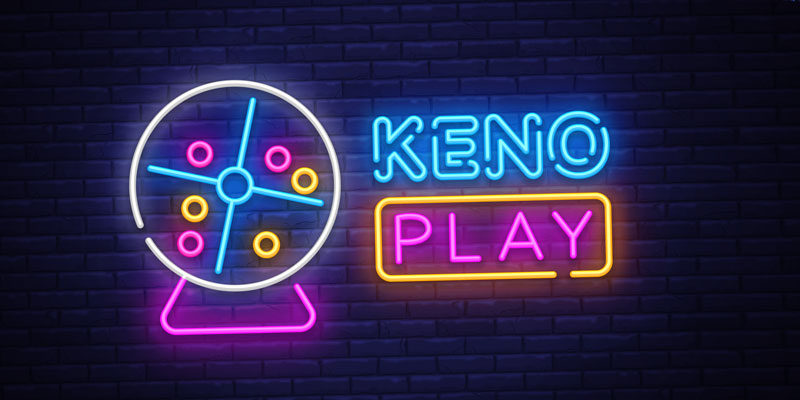 Finally, there are multiple betting options available, but they vary from casino to casino, so it might be a good idea to check the options you have before you start playing.

Finally, keno is a game of chance, and whether you place small bets or plan ahead, there is nothing you could do to guess the outcome of the game. You could always play multi-race cards, but in the end, you will have to pay more, and naturally, your chances would be higher. In the end, the only way to win big at keno is to be really lucky.