Since it appeared, video poker has been struggling for players’ attention. This game has many similarities with slot machines. It is easy to use, you do not interact with the dealer and co-players, and RNG controls the cards. That is why some see it as a poker slot.

Unlike slots, this game demands a certain level of skill. Video poker players have to make decisions that influence the result. And in order to make the right move in this game, you should know the basic rules.

How to Play Video Poker

The gameplay of video poker is pretty simple. The machine will deal you five cards from a 52-card deck. Some games also have a Joker Wild card, which is used to complete the hand you wish to make.

Once you get the cards, you will have to choose which cards to keep. You’ll do this by clicking on the cards you want, and then hitting the Draw/Deal button to get a replacement for those you wish to dismiss.

Since this game is based on Five-Card Draw Poker, you will have to make one of the ten winning hands. The highest prize goes to those who hit a royal flush. This is the strongest hand in every poker game, and it is represented by a combination of cards from 10 to Ace with the same suit.

The second strongest hand is a combination of subsequent cards with the same suit. These can be any cards except those that make the royal flush. For instance, a straight flush can be 3, 4, 5, 6, and 7 of Spades. 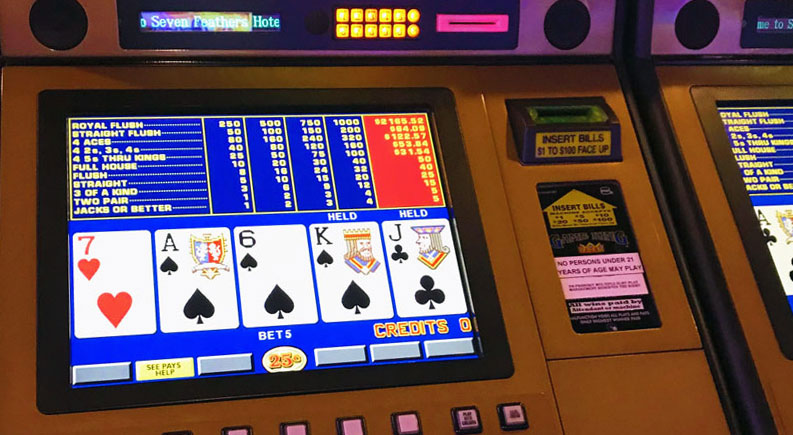 A four of a kind represents four cards with the same value. It can be, for example, four Aces.

A full house is a combination of three cards of one suit and two cards of another suit. This can be, let’s say, three fives and two eights.

A straight is the sixth-highest hand. It is a combination of five consecutive cards which are not of the same suit. As an illustration, 4 of Spades, 5 of Hearts, 6 of Clubs, 7 of Diamonds, and 8 of Spades create a straight.

What the amount of your payout in video poker will be depends on the paytable, which is different for each version of the game. Before you start your video poker session, you should always take a close look at the payout chart. If the quotas for hands are low, the game probably won’t be profitable.

For example, in most casinos Jacks or Better is the standard video poker, and the lowest-paying hand is a couple of Jacks. The payouts will be higher for stronger hands. Standard ranking in Jacks or Better looks like this:

Common Versions of the Game

Today, there are hundreds of different video poker versions available. The most common is Jacks or Better. It is a game in which you will get a payout each time you have a couple of Jacks in your hand or better. It does not have wild cards. 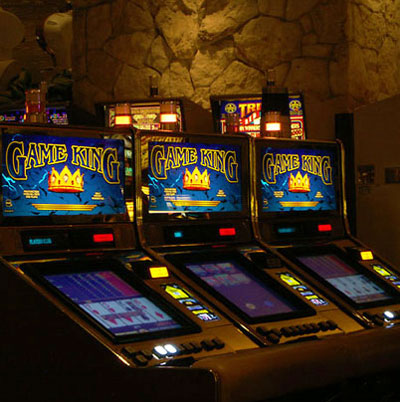 If you wish to play a version that does have an additional card that will give you a chance for better hands, you should play Joker Poker. This game has Joker as a wild card. However, to win, you need a pair of high cards, which is two Kings or better. Joker creates the opportunity to make a five of a kind, Joker royal flush, and a natural royal flush. These hands are added to the paytable, and a natural royal flush will have a higher payout than a hand with a Joker.

Another interesting variant of video poker is Deuces Wild. In it, all 2s are wild cards, and you’ll need at least a three of a kind to get paid. Yet, the chances of getting a four of a kind are 1 in 15. The paying chart also includes a five of a kind, Joker royal flush, and a natural royal flush.

Playing any casino game for real money, especially video poker, means there will be long runs that will lower your bankroll. To remain in the game, you will have to predetermine the amount which is big enough to endure.

That means you should have the amount from which you’ll take only 10% to the game. So if you have 200 dollars, you will take in the game only 20 and risk $0.20 for every hand. That way, you will cope with losing streaks pretty easily and be able to profit once wins start coming.

How to Win at Video Poker

Now that you know the main elements of the game, you should learn about the method that might give you a higher chance to win. Most video poker games can be approached with the optimum game strategy. Let’s see what this implies.

Sometimes, you will have to make a decision that might be tricky. For instance, you might get a hand with Ace, two 6s, a King, and a Jack. Here, you already have a pair of sixes, but you also have a chance to make a straight with high cards.

If you aren’t sure what to aim, fear not! There is an optimum strategy for each case. You can look at the paytable and decide which cards to keep based on that, and that is how you’ll create a possibility for the long-run profit.

In Jacks or Better, when you get the mentioned hand, you might consider keeping the pair of 6s. However, if you consult the chart, you’ll see that holding the Jack, King, and Ace is a better idea because you have a chance to make a Straight. If you decide to keep the 6s, you will not get paid.

Also, for any of the video poker variants, the paytable will help you realize that it is better to play with five coins than with four because, when you get a Royal Flush, the payouts will be larger. For example, in Jacks or Better, playing with five coins will earn you 4,000, and you will get only 1,000 for four coins. Nonetheless, take a notion that chances of getting a royal flush are quite low. That is why you should carefully choose the hand to aim at.

In many online casinos, you will find a video poker that includes bonuses that can increase your bankroll. Nonetheless, you should be aware that there are more requirements for video poker bonuses than for other online games. The reason for that is a low house edge.

To boost your bankroll, you can also use a rewards program. It gives you points during the game, and these can be converted into money. On some sites, you’ll also find special bonuses. They can come after you have played a certain number of hands or if you played the game on a particular day. Another important thing is that many online casinos give a higher RTP percentage for video poker than for slot games.

The house edge is pretty low in this game. So, at some sites, good usage of bonuses and promotions can help you push this house edge to your advantage.

Many variations of video poker brought some innovations to basic rules. However, the base of the game remains the same. It is easy to learn a combination of a slot machine and Five-Card Draw Poker in which your profit is determined by the poker hand you get.

The thing you should be aware of when you decide to play this game is the payout chart. Knowing how much you can get for each hand will help you make your optimal strategy.

You should determine how much money you are willing to invest and use only 10% for the first round. Bonuses can help there, just be aware that video poker has more clearance demands than other online games, due to the low house edge.

The good thing about this game is that you can take your sweet time to choose cards and decide which hand to chase. Just remember that these choices give you some control, but luck is still an important element of this game.