Sic Bo is a game that involves three dice, and it originated in ancient China. While it is almost impossible to put an exact date of the creation of the game, we can undoubtedly say that it is quite old. The name of this dice game can be translated to “precious dice.”

The game itself has evolved a lot during the years and even had several variations, like grand hazard and birdcage in England specifically. However, the original game of Sic Bo remains one of the most exciting casino games to this day. Naturally, the game is more popular in casinos located in Macau or in the Philippines, but you can also play it in the United Kingdom legally since 2002.

During the 20th century, the States were introduced to this incredible game by Chinese immigrants. The game became rather popular, and today you can find it in almost any casino in the United States.

While the basic rules of the game are simple (similar to roulette), the betting system and options can be a bit more complex.

When you place your bets, the dealer will throw the dice, and if you manage to guess the outcome, you win. On the other hand, if you make a mistake and guess wrong, you will lose the bet. Similar to roulette, you won’t do anything but place your bets. You won’t be the one that throws the dice like they do in the movies either (that’s Craps, not Sic Bo). Players of this game can only place their bets and try to guess the end result.

In modern casinos and tables, dice would be placed in a glass dome, and instead of throwing them around, the mechanical bottom part of the dome would shuffle them. This way, neither the players nor the dealer would actually touch dice to ensure the fairness of the game and that the outcome is entirely random and based on chance.

Sic Bo Table or Board

While it may look confusing at first, the table for Sic Bo is rather easy to understand and use. The table is designed so you could try and predict the outcome of the game, and there is every possible combination written on the board.

Since Sic Bo is a game of chance, there will also be odds for each of the combinations. Naturally, there can be variation in the table layout depending on the casino, and whether you are playing in a land-based or online casino. However, when it comes to payouts, the rules are almost identical everywhere.

On the table, you will be able to see different betting options like guessing a single dice, or the result of two, and even all three dice.

Like we already mentioned, you could bet on a single number or even place several different bets, like in roulette. Depending on the bet amount and the type, the payout can vary between the size of the initial bet and up to 180 times of the same bet.

Odd, Even, Small, and Big Bets

The first of the options you can select is to bet big or small. The small bet counts for the total sum of all three dice to be between four and ten. The payout for this is 1 to 1, and the chances of hitting small bet are 48.61%. Similarly, for the big bet, the payouts and odds will be the same, but the total sum should be between eleven and seventeen. For both bets, triples won’t count, so getting four fours, for example, won’t win you a big bet.

The same odds and payouts apply for betting on even or odd sum of all dice. Of course, triples once again won’t win you even or odd bets.

These are the most popular bets, and they, naturally, have the highest probability. So, if you are looking for the bet type with the highest odds, one of these should be your choice. Unfortunately, since the odds are so low, the payout will be low as well. Finally, the house edge for all four of these bets is 2.78 percent.

The second low-risk bet you can try is guessing a single number out of potential three that may appear on dice. If you bet on, let’s say, number three to appear, you will get one on one payout if this number shows on any of the three dice. If it appears on more than one die, you will receive a double bet or two on one. Finally, if it appears on all three dice, you will receive a triple bet. The chance of getting any triple is 0.46 percent, and the reward you get is just triple the initial bet on that number. 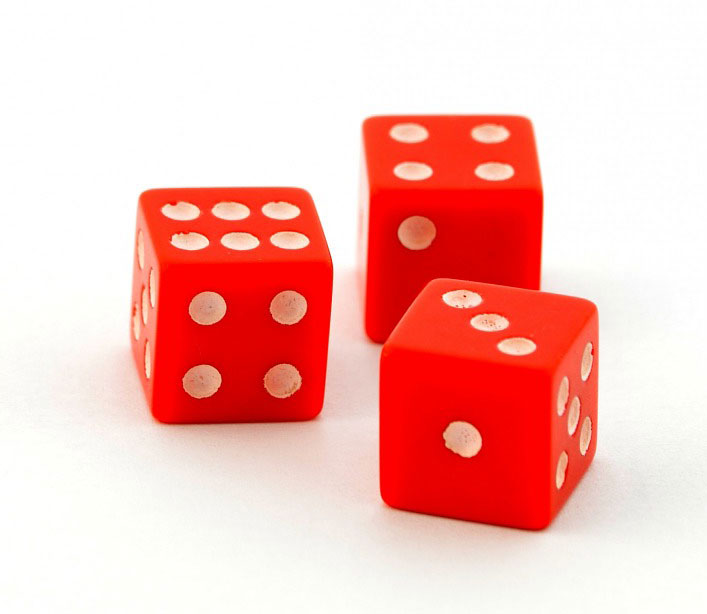 The next, more rewarding, type of bet you can take is the so-called three dice total. Similar to big and small bets, you will have the option of betting on the specific sum of all three dice. The range is between four and seventeen, and you can place your bet on any number in between. The highest payout (and the highest odd) is for the numbers located on the edge of the Sic Bo board — these are four and seventeen. If you guess correctly any of these two numbers, you will get sixty times (or even sixty-two in some casinos!) your original bet. The next two sums with the same odds are five and sixteen with thirty to one payout, and so on. The lowest paying of three dice total are ten or eleven with six to one payout.

Betting on specific double or triple will win you big. If you manage to guess two numbers that will appear on two dice, you will win ten to one, and if you manage to predict any specific triple, this will win you hundred-and-eighty times your original bet, which is also the highest win in the game.

You can also try your luck guessing any triple with the lower odds (compared to the specific triple) of “just” thirty to one.

How to Win at Sic Bo

While there are several betting strategies that you can use, none of them are guaranteed to work. Sic Bo is a game of chance, and there is no secret trick that you can use to win here. Of course, similar to roulette, you can place several different bets each round.

For example, if the combination of dice is one, three, and six, every player who placed their bets on either one, three, or six would win. Furthermore, the combination of two dice will also be a winning bet like one and six, three and six, and one and three. Finally, you would win if you placed your bets on the small bet since the total sum is ten, or if you bet on an even number.

As you can see, if you placed your bets on each of these bets, you would’ve won a lot. Unfortunately, there is no guaranteed way to predict the outcome of the game and to determine the value of the next three dice.

The best thing you could do is to place bets that are somehow related where you would try to guess some number, let’s say it’s four, and place your bets around that number. For example, betting on an even sum, that number four will appear, four in combination with any other number, and the sum that is either big or small (probably big in this case).

Today, the popularity of Sic Bo is only growing, and you can find it in almost any casino in the world. Naturally, some casinos will offer more tables, while others will offer only one. The chances of finding at least one table are pretty high.

Furthermore, almost every online casino available offers Sic Bo as one of the games in their repertoire. The basic rules of the online Sic Bo are the same, and the only thing that can be different is the betting range, and payouts for certain combinations. Finally, there are casinos that might offer a bet where you will have to guess three of the four numbers that may appear in sequence, for example, any three numbers out of six, five, four, and three sequences.